Pushing like mad to make a 2016 Olympic Dream a Reality

Do you want to help one of our very talented young sailors with her Olympic campaign? 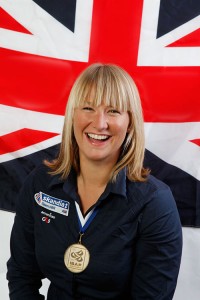 I caught up with Olympic campaigner, Mary Rook, following her recent domination of the Nacra 17 GBR Olympic qualification series, with Helm Tom Phipps, and despite their win there can only be low level financial support for her Olympic campaign until they can achieve International success.

Mary has several National, European and World championships under her belt. A quick look  here at her list of achievements https://www.maryrook.com/about will give you an idea of the skill she possesses. We asked her how it all started?

“I started sailing quite late, I was about 13 and it was due to my Dad retiring from farming, and he found the time to get back into sailing again. Previously Mum had grown up sailing and racing with her family, and Dad had taught himself to sail and became pretty good at it competing in regattas around the world and in various Olympic boats. 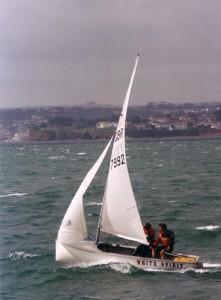 The Early Days, Mary Rook sailing and Albacore with her father Jerry.

Dad bought an Albacore as a good sea boat for the epic sailing conditions in Lyme Regis – our closest sailing club. I always say I learnt to race rather than sail, as Dad, like me, has no patience for casually sailing about!  I got straight into racing and absolutely loved it!”

Having shown such enthusiasm for the sport her parents bought her a 420 and set her off on the path to RYA Youth Squad.

“I shared my 420 with my good friend and local Lyme Regis sailor Hannah Burke. Our parents then kindly took us around to lots of different open meetings and the National championships -where we met lots more sailing friends, many of whom I am still close friends with now! 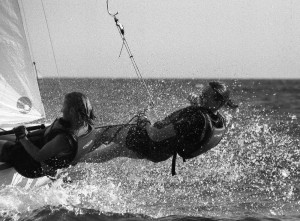 Mary Rook sailing her first boat, a 420 with Hannah Burke in Lyme Regis

At these open meetings we found out about the Zone Championships and Transitional Squads that funnelled sailors into the Youth Squads. We qualified for the 420 squad and found ourselves being inspirationally coached by some Olympic greats.”

Once at National Level the costs involved with keeping at the top are not insignificant.

“As we could not afford a new boat, and the travelling costs involved were so high, I went on from helming my boat with Hannah to crewing for good friends I met on the circuit, firstly Rachel Wigmore and then Jo Brigg.”

Success soon followed and Mary went on to represent the country at three World championships, four European championships and many national events. 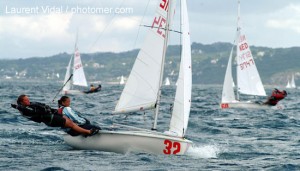 “In my last year at Youth Squad we were at the 420 World championships in Brest in France and we were winning for the whole week, until the last day when the wind went crazy shifty and light and we had a bit of a shocker and slipped down to fourth! It was hugely painful but I was completely addicted to competitive sailing!”

After leaving Youth Squad, and at the same time school, Mary started studying Sport Science at Exeter University and her sailing career took a varied path.

“From school I went on to Exeter University where I studied whilst being part of the transitional Olympic squad, and did a bit of Yngling training in the weekends. I dabbled a bit in the 470 and then got into match racing all around Europe (mostly because you didn’t have to own a boat and everything was provided once you turned up at the event!). I also played Rugby for the University Ladies Team, but gave it up as it got in the way of sailing!”

After University Mary worked for Sobstad Sails – now part of Elvstrom Sails in Hamble which lead to lots of big boat sailing experience and was accepted on to Kit Hobday’s “Bear of Britain” Keelboat Training Scheme where she gained experience as the sole spinnaker trimmer on a 54 foot boat for a season of racing. Not long after she took a job with the RYA Marketing department where her responsibilities included organising the RYA Dinghy Show. It was then that her first chance at an Olympic place surfaced. 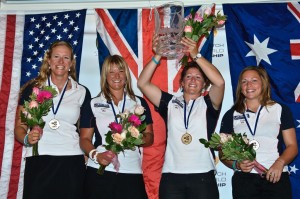 “At that point in time ladies match racing got selected for the Olympics, and having done lots over the past few years with a great group of girls, we decided to take some time off work and give Olympic sailing a go. Winning the UK Match Racing Nationals as helmsman I managed to get into the elite squad of girls training towards the games, and received some UK Sport funding. We went on to win the highly competitive World Championships in New York in 2010. But in the long run, winning the Worlds 21 months before the Olympics did no favours for the GBR team as the decision was made not to maintain a competitive UK second boat. This left me out in the cold, so I decided to put my talents to use elsewhere. The GBR team went on to finish a disappointing 7th at the Olympics.

‘Elsewhere’, for Mary, meant all over the world. She had the fantastic experience of sailing as observer on the back of the 90 foot Americas Cup boats which were used prior to the catamaran era, she has coached the Omani Ladies Team, raced in 2 Saudi Arabia Tours (SATT), one with Dee Cafarri where she ‘learnt a great deal from her inspirational leadership’. She sailed the Louis Vuitton Cup in Nice and the re-run of the original Americas Cup around the Isle of Wight with Ben Ainslie as helmsman to name but a few. 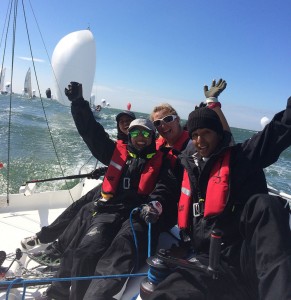 “This Summer I was the keelboat coach for the Omani ladies in keelboat events in Europe including Cowes Week.  Oman Sail, gave me the chance to go for a sail in the huge catamaran Oman Air which broke the record for the Round Britain and Ireland Race in just over 3 days. Even in the Solent it was doing 35 knots downwind and 28 upwind.

It has always been Marys intention to compete at the 2016 Olympics and everything she has been doing for the past few years has been with that goal in mind, but having never sailed catamarans before how did she end up in the Nacra 17?

“The 2016 Olympic cycle was always going to be quite different and I knew from quite early on that both a mixed catamaran and a girls skiff would be introduced, so I took the opportunity to get as much experience as possible in both types of boat, sailing with some of the top British talent including double Olympic medallist Simon Hiscocks – of SHOCK sailing and Catamaran expert Grant Piggott – of GP sails. The RYA started quite early with training up a girls skiff squad in RS800s and I found a great person to sail with and so I became part of the squad straight away and I qualified for funding during this period.

I was involved in the ISAF trials at Santander as one of the GBR sailors to choose the new Olympic girls skiff and the mixed catamaran. Among the skiffs on trial, the RS900 was a great boat but had not been given enough time to iron the bugs out, so the modified 49er – the FX was chosen – built by Ovington Boats. The 49er is a great boat to sail, but needs quite a lot of learning time – a lot of which is spent recovering from capsizing. The NACRA 17 was an outstanding catamaran and we had some exciting moments when they climbed up out of the water with their curved dagger boards acting as hydrofoils! I have subsequently learned that this is not recommended due to the sudden halt to proceedings when the cat crashes back onto the surface of the water! The Nacra calls for a very strong and nimble crew which suits my physique well. 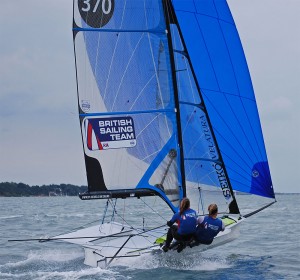 Mary Rook with Kate Macgregor at the 49erFX nationals which they won in 2013.

I was selected for the GBR 49erFX squad and the decision was made to have a rotating squad for the first year. At every event we changed helm and crew combination, during which I won a silver medal at the Hyeres Olympic class regatta. At the end of the year we were allocated into pairings, rather than being able to choose them ourselves. You really have to get on well with the other person in the boat, especially at high stress events and my pairing didn’t work out. I left the 49erFX squad searching for the best possible person to partner up with and I have found that with Tom Phipps in the Nacra catamaran.”

Even though this pairing with Tom is still very young they have already had a great start this season finishing 16th in the Europeans and 23rd in the World but it is this success that has proved the biggest challenge. Their recent success in the GBR Qualification series where they beat nationally funded teams is a great stepping stone and proved they are up to the task, the ability is there but they need to have that opportunity to do that on the international stage. 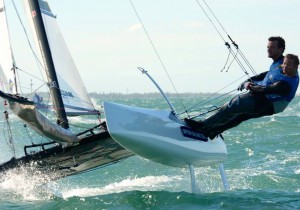 Mary & Tom at the European Championships 2014 in the Nacra 17

“Tom and I dominated the GBR qualifying series, against a far more nationally supported fleet. We have both been inspired and motivated by the result and are now in a position where we are going to push like mad to make our 2016 Olympic dream a reality. Despite our great recent form, the RYA who govern the national financial support have communicated that there is not a space for us in the Performance Squad at the moment. We are in a position where we have all the motivation and weapons, but currently not the ammunition to make it work. In order to realize our potential, Tom and I will, and need, to do more than the other serious teams around us. This includes more training and more racing than ever. The first major regatta for us is on the other side of the world in Miami, Florida. As I’m sure you will all understand, arranging ourselves and the boat to be in Miami for the up and coming regatta is no easy task, both logistically and financially. Tom and I working tirelessly to make sure logistically we are ready to go, but financially things have been taken a little out of our hands.”

To that end if there is anything that you can do to help, or know anyone who can help then please get in touch through her campaign website https://www.maryrook.com/ 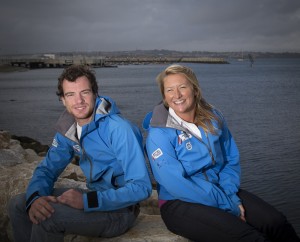